When you see a court recorder’s stenograph in a courtroom, movie or on the news, it might look like a relic from the past, but this special tool has a rich history. 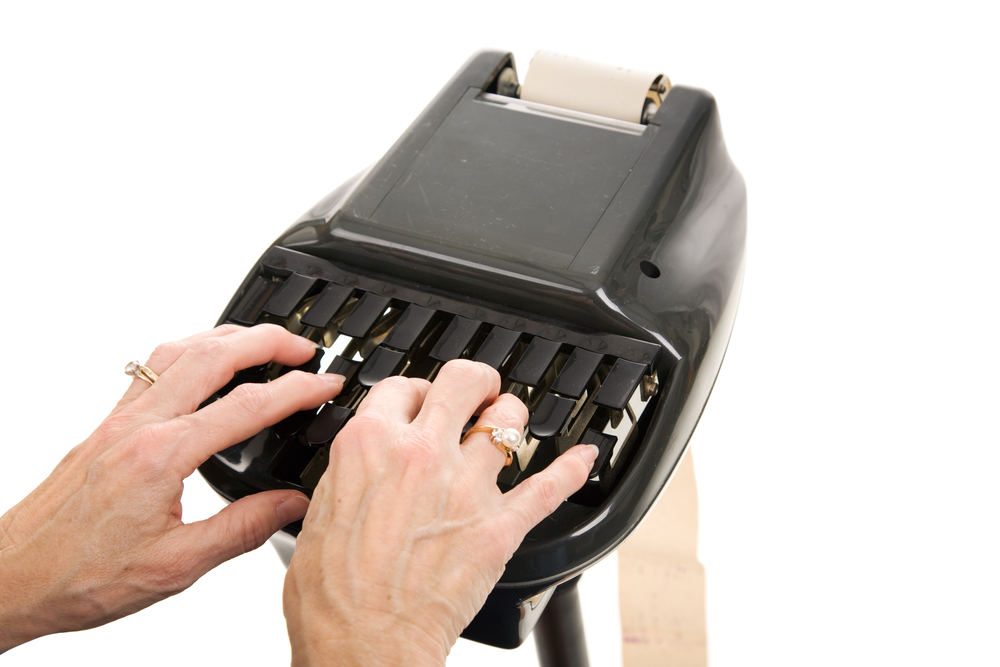 Miles Bartholomew invented the first shorthand machine in 1877 (well, the first one that actually worked). It was consistently fine-tuned while patents were secured between 1879 and 1884. Bartholomew owned a company in Illinois, the United States Stenograph Corp., which was created around his most famous invention. Writers around the world used the original, Bartholomew-style stenograph until 1937.

The first machines had 10 keys, and each counted as a single-letter stroke. This created dashes and dots, similar to Morse code. Bartholomew himself was a court reporter who was later dubbed the “Father of the Stenograph.” His machine was the first to succeed in court recording, and it also was used in some schools, especially those training future court reporters.

However, the first stenograph didn’t bring much financial success to Bartholomew.

Bartholomew wasn’t bothered that his stenograph didn’t make him rich, because as a court reporter, he believed in what he had created.

“The old prejudices against machine stenography are giving way to confidence in, and acknowledgement of, its superiority over the pen, and the tide of public favor is raising rapidly in the front,” he wrote in 1883.

Such sentiments largely can be agreed upon today, as many people rely on mobile devices such as laptops and smartphones to do their writing instead of a pen.

In 1889, George Kerr Anderson created the Anderson typewriter, another shorthand machine. This one had the first keyboard that let users depress more than one key at a time. It also featured English letters instead of dots and dashes.

Full syllables and words could be written with a single stroke for the first time, vastly speeding up the process of taking shorthand. Anderson used the typewriter as his inspiration, but saw the single-letter-at-a-time idea too cumbersome for shorthand.

His machine wasn’t widely accepted, but it was used to record President William McKinley’s inaugural speech, and that earned it its spot in shorthand history.

The Universal Stenotype Co. in Ireland invented the Stenotype Shorthand Machine in 1911. It had a fully depressible keyboard, could write numbers and words phonetically with each stroke, and featured the fewest strokes necessary per output. It won the 1914 National Shorthand Reporter Association’s speed contest, taking down 30 expert pen writers with an impressive 99.3 percent accuracy rating.

Weighing just over 11 pounds, it was still much lighter than similar machines before it — its predecessor weighed a whopping 54 pounds!

That was over 100 years ago, and stenograph shorthand machines are still going strong. Connect with a court recorder who’s a pro at stenography by reaching out to DepoMaxMerit Litigation today.